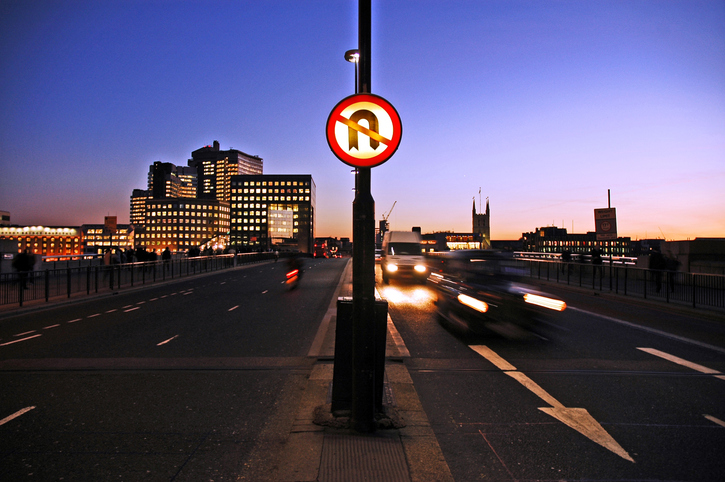 When is a U-Turn Legal and Safe?

According to recent statistics, about a quarter of all US traffic fatalities are associated with intersections. While not all of these deaths are a result of illegal U-turns, many of them are, and trying to execute one at any of these intersections drastically increases the likelihood of a collision.

But, you may be asking, what exactly constitutes an illegal U-turn?

Read on to learn about when they are illegal and unsafe as well as the penalties that can be associated with being caught making one.

What Is an Illegal U-Turn?

There are a few situations where U-turning is definitively defined to be illegal.

The first is, of course, when a sign is posted explicitly stating that they are illegal at a certain location. As always, you should be alert and aware of all traffic signs while on the roads. Making sure that you aren’t violating any posted signs is the first step to executing fully legal driving in any case, and U-turning is no exception.

You also can’t make them when you aren’t able to see at least 200 feet in every direction. If obstacles like buildings or trees are blocking your view within this small frame of space, this driving maneuver can cause collisions and is therefore not legal.

There are also specific locations that you can’t make U-turns. You can’t if you are at a railroad crossing or in front of a fire station. You also can’t on divided highways where there are either two sets of double yellow lines or a curb in between you and the other side of the road.

Generally, beyond that, the law states that you can “when safe to do so.” This means that when it is unsafe it is, in fact, always illegal. All of the main situations where it is illegal for safety reasons can be figured out by using simple common sense, but it’s best to know them anyway.

Making a U-turn on a one-way street is something that you absolutely should avoid. This makes sense, especially since there’s no way for you to go backwards down these streets. If another car is (perfectly legally) driving down a one-way, this is a recipe for a hard-and-fast head-on collision.

In general, you just shouldn’t be making U-turns if it could cause you to be hit for other vehicles. You’ll need to know the traffic laws in your state to understand how cars are going to be moving along the roads. This can be learned with internet research, sure, but a better way to get this information is to choose your state from this list and take a course in your area on traffic safety.

In business districts, you can’t unless you’re at an intersection or on a divided highway. In summary, you can only make a U-turn where a specific opening has been provided.

Also, note that you need to be aware of your surroundings when deciding whether or not to make a U-turn! There are places where you legally could execute one but shouldn’t due to oncoming traffic. You don’t want to find yourself in a crash, no matter what the reason for it may be.

In some US states, there are designated ‘U-turn lanes’ that drivers must use if they want to make one. For example, in Texas and Georgia, there are specialized lanes that allow cars to turn over a freeway from a one-way frontage road onto the opposite frontage road. These lanes exist so that traffic made by U-turns can avoid crossing local traffic two times.

The bridges that make up U-turn lanes can be different lengths and widths depending on their surroundings, so make sure that you do your research and remain aware if you’re in one of these states.

Aside from the obvious possibilities of collision and injury, there are legal penalties that you’ll likely face if you make an illegal U-turn. One such penalty is that if there is an accident, your insurance will need to pay for any of the damage. This means that your monthly insurance payments will skyrocket.

If you injure someone or hit something, you’ll be given different fines (or even jail time) depending on what happens.

However, even if there isn’t a collision, you’ll definitely be fined if you’re caught. Fines for making illegal U-turns average around $125, but they can be higher or lower depending on the transgression. If you have made a first-time offense, it’s going to be a lower fine. If you’ve already been arrested for traffic violations, though, you’re likely to get higher fines and, in some circumstances, jail time.

If the court deems it a fitting penalty, you can be sentenced for up to 15 days of jail time. This is incredibly unlikely to happen, but it does happen when you have had multiple transgressions before.

While there are a lot of aspects to becoming a safe driver, knowing when and when not to make U-turns is one of the most essential ideas you need to understand.

Now that you know the basics on U-turn safety, it’s time to get some more information about how to keep safe while on the roads. The best way to do this is by taking a defensive driving course. Click here to sign up for a free demo of the online course that we offer on driving safety. In addition to learning how to stay safe, taking one of our courses can lower your insurance costs or eliminate existing traffic violations.