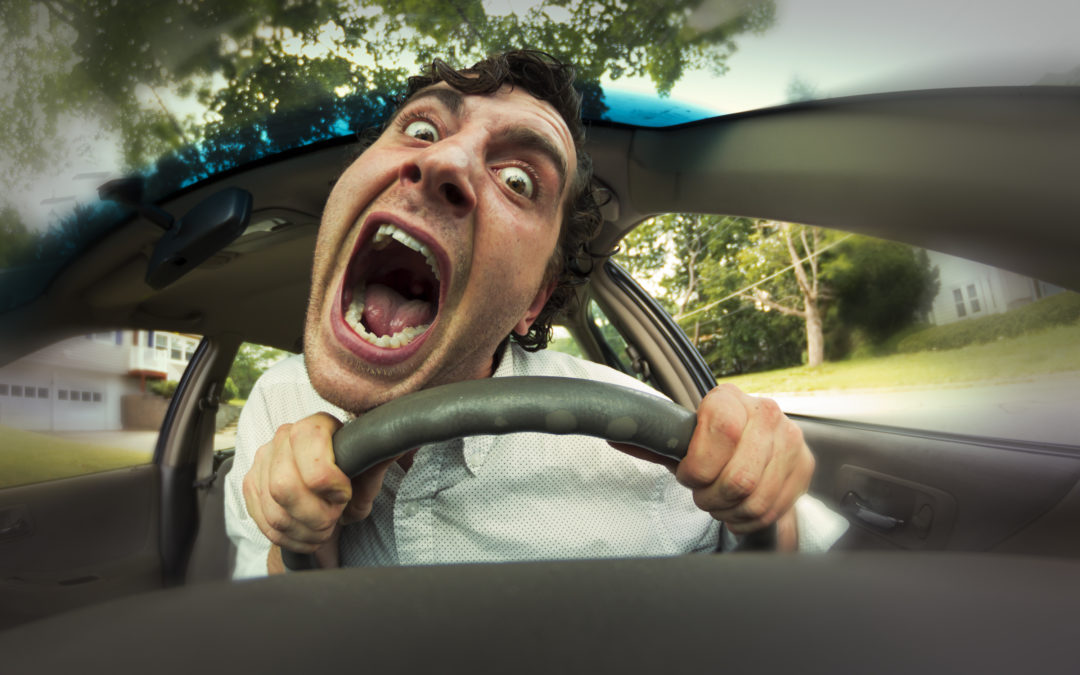 You’re driving in the right lane and notice a driver tailgating you. A jammed acceleration lane prevents the driver from crossing over. You’re going the speed limit.

You remain at your normal speed, ignoring the driver. The driver begins honking incessantly and acts aggressively. Through your rear-view mirror, you notice that the male driver is angry and gives you the middle finger.

You grow fearful by the motorist’s angry driving. When enough space opens up, the driver moves to the acceleration lane and throws something at your driver window while speeding by. You’re spooked by the entire ordeal but glad the driver moved ahead of you.

Chances are that you experienced aggressive drivers at some point in your life. Road rage can occur in the event of construction, detours, cutoffs, or slow drivers. Road rage is illegal and can lead to physical altercations and shootings. Overall, you should deescalate a road rage situation.

How Does the Law Define Road Rage?

The law distinguishes between aggressive driving and road rage. Aggressive driving occurs when a driver exhibits aggressive tendencies on the road, such as speeding or tailgating. Officials may also ticket you for following too closely or reckless driving.

Road rage is a serious offense because the law sees road rage as a threat to public safety. Road rage involves a violent intent in some form, which can include:

A duty to care is a legal term that compels citizens to care for the safety of others. Acting recklessly on the road violates the duty of care obligation and exposes you to criminal charges and/or civil lawsuits if you injure or kill someone.

What Are Some Road Rage Penalties?

Road rage within itself isn’t a crime, but actions arising from a road rage incident can cause harm. For instance, yelling or displaying rude gestures at someone qualifies as road rage but it’s not a crime.

If an irate driver fires a gun into a car, however, a cop could charge you with such offenses as the reckless discharge of a firearm or attempted murder. Further, if both parties engage in a fight in the middle of the road, they could face assault charges and/or disturbing the peace.

Also, a ticket from an aggressive driving or road rage event could increase your insurance rates, or the courts could force you to take a defensive driving course.

Since you don’t know where a road rage case may lead, it’s best to deescalate the situation rather than stoke the flames.

How Can I Walk Away from a Road Rage Incident Safely?

One good way to ease tensions is to look away from drivers. Avoid eye contact because it signals your intention to engage with the other person.

While avoiding contact, apply the brakes to place some distance between yourself and the other driver. Additional space also allows you to brake or maneuver suddenly if necessary.

Moreover, you can also wave apologetically at an angry driver if you make a mistake on the road. A friendly wave or gesture goes a long way in diffusing tensions. You can also move your car out of a lane or signal to correct any wrong you might have committed on the road.

If all else fails and another driver threatens or harasses you, call 911 immediately. After phoning the authorities, provide any description you can on the driver and the motor vehicle.

Finally, you can play a large role in dispelling a road rage incident by controlling your own anger.

How Can I Control My Anger?

If you’re prone to anger suddenly, listen to some calming music while you’re in the car. Music can ease your stress level.

You can also apply the following breathing exercises:

A breathing exercise is a direct way to address abrupt anger and place you in a state of calm. It’s also in your best interest to act calm at all times. Avoid losing your cool or getting overly stressed in the event of a construction or a traffic jam.

What Are My Chances of Being in a Road Rage Situation?

According to studies, men are more likely to be the victims of road rage than women. Men are also primary perpetrators of angry road spats, especially men between the ages of 35 to 50.

Teenagers, in particular, can also be the most impulsive on the road, especially teenagers that are under 19. Senior citizens show the lowest rates of rage cases on the road.

Over 60 percent of fatalities stem from aggressive driving, mostly in the form of speeding.

How You Respond to Angry Driving is Half the Battle

Reducing your anger plays a big role in how a driver responds to you. Road rage and aggressive driving can cause events to spin out of control and possibly injure or kill someone.

Angry driving can lead to a variety of ramifications, such as accidents, physical assault, injury, and death. You can also take a defensive driving course to respond to enraged drivers effectively.