What Drivers and Pedestrians Can Do to Reduce Fatalities 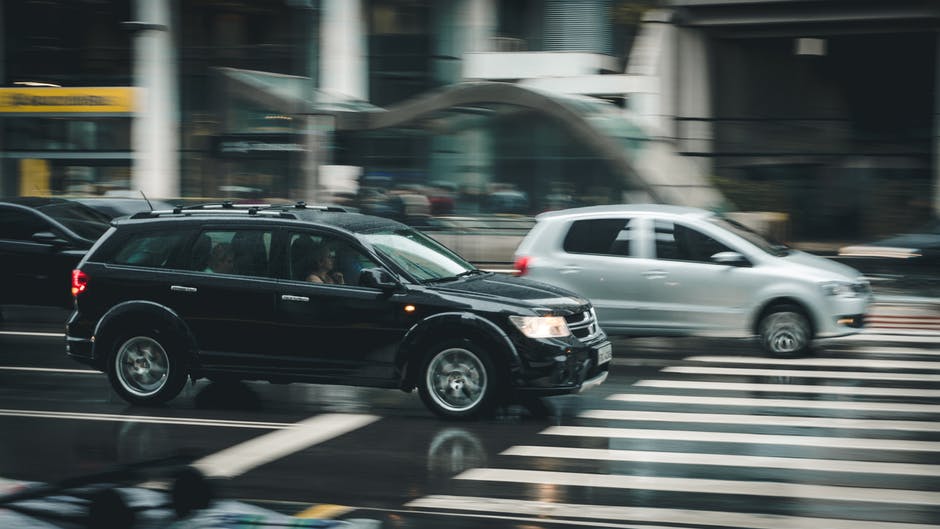 How To Reduce Pedestrian Traffic Fatalities

In 2018, at least 6,227 pedestrians were hit by drivers in the US. This is the highest number of pedestrian traffic fatalities and injuries since the 1980s, and with the increased use of technology as a distraction for those behind the wheel, this number is increasing each day. One thing’s for sure – both drivers and pedestrians need to take precautions before going out to ensure that the roads are a safe place for everyone.

Since the road belongs to everyone, that means that everyone on the road – pedestrian and driver alike – are responsible for their own safety and that of others. No matter how safe of a driver you think you are, it is critical that you take the appropriate precautions against pedestrian traffic fatalities and injuries.

Here, we are going to give you the specific numbers of why this is important, and tell you what you can do to limit pedestrian traffic fatalities and injuries in car vs pedestrian encounters. 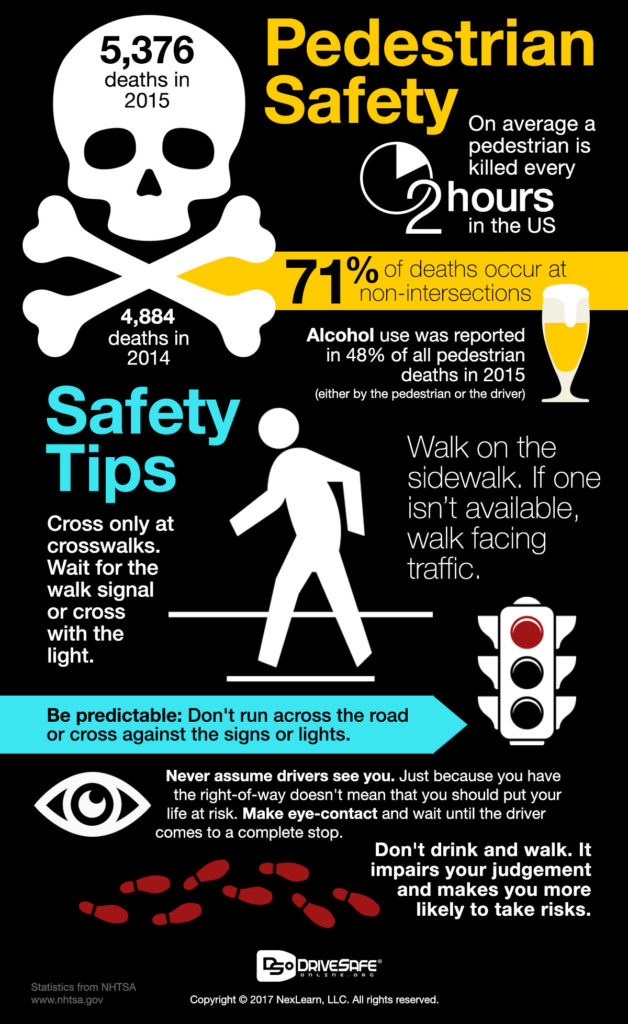 While pedestrians need to be responsible for their safety as well, the precautions need to begin with the driver. After all, in any car vs pedestrian encounter, the car is going to come out in much better shape, so you need to be vigilant as a driver and take responsibility for others’ safety. Read on to learn some pedestrian safety tips for drivers that you can apply when dealing with people walking on the roads or sidewalks near you.

Keep an Eye Out for Pedestrians

Make sure that you keep a lookout for pedestrians no matter where you are driving. Check all your mirrors and your peripheral vision for human movement. Once you see someone, look to where they are and stop for pedestrians if necessary. Yield to pedestrians and give them the right of way when safe to do so. This includes schools zones and at crossing signs and signals.

While it’s important to be vigilant no matter where you’re driving, there are times and places that you’ll need to be especially cautious. 76% of pedestrian traffic fatalities take place at night (after sunset), so you’ll need to be alert specifically when it’s dark outside. Usually, the death count is pretty consistent during the day all across the week, but it peaks at night on Saturday. The weekend nights are a time when you’ll need to exercise extra caution.

As for places, pedestrian traffic fatalities peak in cities and other urban areas (79%). In suburbs and rural areas, there are three times more deaths on the open road than at intersections. This may be counter-intuitive to what you thought was the case, but it makes sense when you think about it. People on open roads drive faster and more recklessly since they don’t think they need to worry.

Along with driving above the speed limit, zooming quickly through yellow traffic signals and having overly slow reaction times, forgetting to turn on headlights is one of the most common mistakes that even the most alert drivers make. Despite the fact that you’d think that people would notice that their headlights aren’t on, this isn’t always the case. In fact, people tend not to notice this issue when they need their headlights most – in bad weather.

If you have your headlights off, you’re unlikely to see pedestrians in front of your car. Most people don’t leave their headlights off on purpose, but in this situation, negligence can have the same consequences as purposeful lack of care. Make sure that you turn on your headlights every time you get in the car.

While headlight use is unarguably more important at night, it’s crucial that you check and make sure that they’re on during the day, too. You never know when you’re going to be driving through construction or a newly-built tunnel. If it starts to rain, your headlights will be important, too. Just make sure you’re vigilant about this and you’ll be fine.

When you walk on the road, you’re putting yourself at great risk. Not only will you be closer to zooming cars, but you’ll also be making yourself a lot harder for drivers to see. Drivers on the road will be focusing their energy on the other drivers near them, especially when at busy intersections, on busy streets, and even in parking lots. Furthermore, you’re unlikely to be seen among many vehicles – they’re a lot larger than you are.

This is why it’s crucial that you use designated sidewalks when out as a pedestrian. Cars shouldn’t be on these sidewalks, so unless a driver does something really odd that they would have learned not to do at an online driving school, you should be fine. While important to keep aware, walking in designated pedestrian areas greatly reduces your risk of being hit.

If there are no sidewalks and you need to move, you should walk facing traffic. This will allow you to see what’s coming toward you so you can get out of the way if needed. It will also make cars more likely to see you since your face has more noticeable features than your back does.

Speaking of not walking where you aren’t supposed to be, make sure that you use crosswalks appropriately when walking. Those who jaywalk increase their risk of being hit by a car substantially. This applies to both jaywalkers who cross intersections when they don’t have the ‘go’ symbol to those who cross streets at places that aren’t designated crosswalks.

The fact that there’s a lot of jaywalking in cities contributes to the fact that 79% of pedestrians hit were killed in cities. When you walk across the street in an area designated to do so, drivers will be keeping a lookout for you. They also will be forced to stop by traffic lights that turn red when pedestrians get the ‘go’ symbol. However, if you walk in the middle of the road where cars are zooming by at 40 mph, they aren’t looking for you and are more likely to crash into you.

You’ve most likely heard that “pedestrians have the right of way.” While this is in most cases true, it doesn’t mean that cars are always going to yield to people walking. From impatience to get somewhere to distracted driving, there are a lot of (poor) reasons that drivers don’t stop when they see someone about to cross the road. Some people genuinely just aren’t thinking that there may be pedestrians in certain areas.

That’s why it’s important to assume that drivers don’t see you until they’ve actually stopped to let you cross.

Make sure that you’re alert and aware of cars that may be coming toward you. Pay attention and don’t expect that someone else will take responsibility for you. This is even more the case if you’re wearing dark clothing. Make sure to wear white or something in a brighter color if you plan to be walking at night, especially alone. This will be more eye-catching for drivers since you’ll no longer blend in with the night.

Accidents involving drinking have the most fatalities each year. In these accidents, the intoxicated party can be either the driver or the pedestrian. Since drinking (or consuming illegal substances) makes you less alert, slows your reaction time, and impacts areas of the brain relating to executive function, this is consistent with everything we know about safe driving.

In order to give you an idea of how common these fatalities are, we’ve looked at some statistics from 2018. During this time, there was a vehicle death related to alcohol once every 50 minutes. There were also 10,511 car crash deaths in 2018 in which a driver had a BAC of .08% (or more), putting them above the legal limit. Out of all traffic-related fatalities, this accounted for a whopping 29%.

The bottom line is that no matter whether you’re a driver or a pedestrian, you should absolutely not go out if you’ve had even a sip of alcohol. Save the ‘I’ve only had one drink’ excuse – it isn’t worth it.

Keep Your Phone Away

Almost as bad as driving drunk is driving while texting or browsing social media. Sending a single text takes your eyes off the road for 5 whole seconds. This is a huge distraction and leads to not seeing obvious things on the road, including pedestrians (and other vehicles!)

Make sure to leave your phone on silent while in the car. This way, you won’t be tempted to answer texts or take distracting phone calls. Not checking your phone while driving includes not playing with it while at red lights – when the light turns green and the car behind you decides to go, you’ll regret your decision.

If you’re a pedestrian, you also shouldn’t be playing with your phone while walking. If you do this, you’re unlikely to be aware of what’s going on around you and are more likely to put yourself in the path of an oncoming car. Make sure that you keep your cell in your pocket and listen to all music with only one earbud in.

Car vs pedestrian encounters are never a good thing, but as long as everyone involved is vigilant, it’s possible to minimize the damages they cause. Make sure that you’re not wandering or driving around intoxicated or distracted and that you stay alert at all times while out of the house. This will decrease the likelihood that you’ll become a statistic for driving or pedestrian traffic fatalities.

Now that you know what you should do to reduce fatalities as both a driver and a pedestrian, it’s time to learn more about road safety. Create an account on our website to get started taking the best defensive driving courses available. Plus, enrolling in a defensive driving program could save you money on insurance, so make sure you check it out!

Stay safe out there!